Credit: Friends of the Delaware Canal

Delaware Canal State Park
is a part of this Bikeout experience:

Culture and camping on the Delaware Canal

Those measurements are part of what makes Delaware Canal State Park one of the most unique parks in the country.

It’s certainly not the most common imagining of a Pennsylvania state park. One might picture a lake, hiking trails and a picnic or camping area. You might think of untouched forests and rolling hills with exposed rock. Traveling the length of the Delaware Canal is something else altogether.

“My first meeting today was 45 miles from my office and it was still on park land,” says Devin Buzard, the Park Operations Manager in charge of the canal park, putting it’s geography into perspective.

Buzard, who spoke to Bikeout in June on a Zoom call—a white bandana mask draped around his neck—took over operations of the park in late 2019 and is balancing its history with its unique modern needs.

As you explore the Delaware Canal, from Bristol in the southeast to Easton to the northwest, you’ll travel alongside the Delaware River on a narrow tow path, where mules once pulled longboats full of coal to port cities like Philadelphia.

In its most productive years, the canal moved over one million tons of coal per year. Today, the towpath has been converted to a multi-use recreational trail that winds through 18 municipalities in Bucks and Northampton counties.

In some parts of the park, like outside New Hope, the river views are all-encompassing and panoramic. In other parts, beautiful houses that line the canal appear from around hidden, green bends in the path. And as you get closer to Easton, more industrial touches are evident, like railroads and bridges.

Completed in 1832, the Delaware Canal operated for a century, when railroads ultimately led to its demise. It was soon acquired as park land by Pennsylvania in the early half of the 20th century and in 1988 it became a part of the Delaware & Lehigh National Heritage Area, a part of the National Park family meant to tell the region’s rich industrial history, which was powered by coal from the anthracite regions of Pennsylvania.

The state park system and the National Heritage Corridor work together to help fund and preserve the area. While the Commonwealth is the land owner of a 60-mile section, the National Heritage Corridor plays the role of a connector, providing programming and engagement and looking beyond the park at the entire transportation system that moved coal from mine to market.

The park, funded by the state, and the National Heritage Corridor, funded by both federal and state tax dollars, both contribute to maintaining the park. But the Heritage Corridor, there to tell the story of the entirety of Pennsylvania’s industrial history, goes beyond the state park, maintaining a 165-mile route that includes not only the Delaware Canal, but the Lehigh Canal, as well.

“As the landowner with the most miles of D&L Trail, Delaware Canal State Park plays a crucial role,” says Elissa Garofalo, the executive director of the Delaware & Lehigh National Heritage Corridor.

"It tells a very important part of the D&L’s story and allows residents and visitors to connect with the history and enjoy this special place that is unlike any other park in Pennsylvania.”

Buzard says that the park has a backlog of $75 million in improvements, in part because its the last canal system with its original water infrastructure still capable of being fully-watered and restored. Other popular canals, such as the Erie Canal in New York or the C&O in Virginia and Maryland, have seen major upgrades and improvements that lack some of the historic details of the Delaware Canal.

"You have a manmade feature that nature is constantly trying to revert back to nature. It wants to take that ditch and return it to the river.”

“As far as the canal is concerned, you have a manmade feature that nature is constantly trying to revert back to nature,” Buzard says. “It wants to take that ditch and return it to the river.”

In 1955, two consecutive hurricanes unleashed disastrous amounts of rain, causing flooding that still haunts the canal system today. In some parts of the region, the Delaware River crested 22 feet above normal and left homeless 200 people in New Hope alone.

The damage done has only been exacerbated by four significant storms in the past two decades. The amount of money needed today to specifically help with that flooding? $28 million.

Of course, the Delaware Canal is only part of a much larger park infrastructure problem. According to a 2019 report, the Pennsylvania state park system has a $1 billion maintenance backlog at a time when parks are being used more than ever.

“The Delaware Canal is an old thing, and it’s a needy thing,” says Susan Taylor, executive director of Friends of the Delaware Canal. “And unless you take the time to understand it and appreciate it, you might not be so inclined to put the time and effort into seeing that it stays around.”

The volunteer group—which has operated for more than four decades—is there to support the park’s preservation and to respond to how it’s being operated by the state.

Taylor shares a reminder that if the park isn’t preserved, it might otherwise end up as private real estate. Not to mention, Pennsylvania is one of only nine states that doesn’t charge entrance fees for its state parks.

“Had the canal not become a park, almost assuredly all of that riverfront property would have been developed one some way or another,” she says.

“That, for me, is one of its greatest virtues. It ensures that the public has access to the river.”

Find tripsFind trips
Why Delaware Canal State Park is one of the most unique parks in the country
Nature is trying to reclaim this historic, manmade canal system. 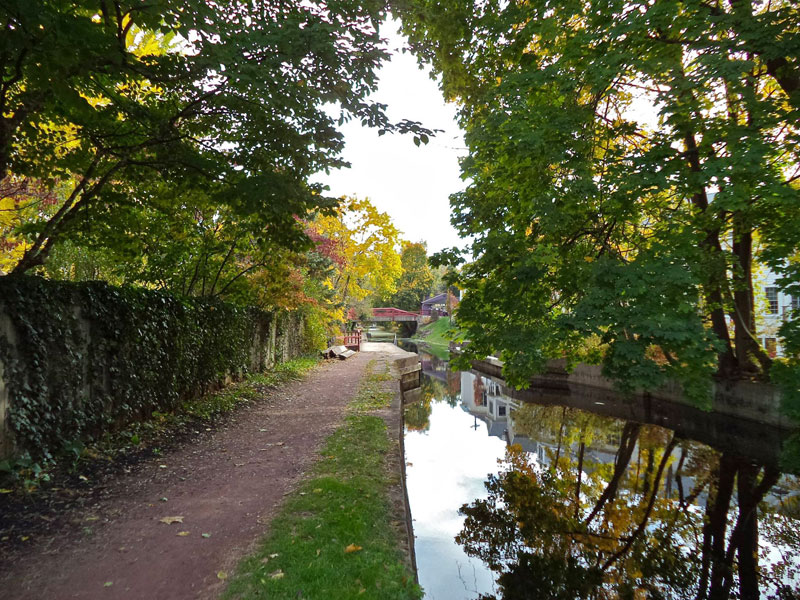