To truly understand the D&L Trail, a 165-mile protected trail system in Northeastern Pennsylvania, you have to split its story in two.

Biking or walking the path today, it’s easy to see it as a robust park amenity, a place where one can escape to a peaceful, colorful towpath for a bit of exercise and relief.

It’s the kind of public space that’s easy to take for granted. Without knowing its past, one might imagine that it was always there, meant for someone to steal away a quiet moment. But over the past 30 years, that’s been the focus of the trail’s development: creating an outdoor space for people to appreciate and explaining how it came to be, work that is ongoing and in part led by the Delaware & Lehigh National Heritage Corridor, a small nonprofit of about a dozen employees based in Easton.

Scattered along the trail are remnants of the area’s illustrious industrial history, its first chapter. You’ll find canal locks, silk and steel mills and paths carved from forests where train engines once bellowed.

Its second chapter? Making sure those places are not forgotten. In fact, better off reimagined, in the forms of mixed-use real estate and new hubs of knowledge-based economies.

Nowhere are these two stories more present than in the trail’s Lehigh Valley corridor, in contrast with the bucolic landscapes of its Bucks County section to the southeast, where tourism already thrives. Here, it travels through Easton, Bethlehem and Allentown, towns reinventing themselves today for a new future, yet grounded in the story of American industry.

That regional history is purposefully being preserved, and significantly so. Established as a National Heritage Area in 1988 by an act of Congress, the designation signifies that the five counties that the Delaware & Lehigh represent — Luzerne, Lehigh, Carbon, Bucks and Northampton — are significant to the story of America’s industrial revolution and meant to be told.

Until the 1870s, the Lehigh Valley was the largest iron producing region in the U.S.

The raw materials that were found in northeast Pennsylvania, namely anthracite coal and iron ore, contributed to some of the greatest monuments in the U.S., places like the Golden Gate Bridge in California and the Chrysler Building and Brooklyn Bridge in New York.

The trail’s industrial history begins in the early 1800s with the Lehigh Coal and Navigation Company. According to the D&L’s historian Martha Capwell Fox, LCN was given unique power to grow.

Because the Lehigh River was either shallow or flooding, it was not a reliable transportation method, which was impeding the movement of coal from the anthracite regions of Pennsylvania.

The company was essentially given complete control of the Lehigh River by the Commonwealth, including the water rights and property on both banks of the river. Along with its ownership of coal mines and other aspects of production, it had almost complete vertical integration, made more potent by unique patents it held to smelt anthracite coal faster than competitors.

“It was organized in a way that they could do almost anything,” she says. “It was the first time that large quantities of iron could be made in a hurry—fast, good and lots of it,” Capwell Fox says.

Until the 1870s, the Lehigh Valley was the largest iron producing region in the U.S. and this led to the expansion of other heavy industries such as forging, cement production and the railroads. Bethlehem Iron moved into steel production in the 1870s, and by 1905 it had become Bethlehem Steel. The constant demand for workers made the Lehigh Valley a magnet for waves of immigrants and the population grew rapidly.

Those conditions set the stage for a century of growth for the steel behemoth—and of course many more illustrious stories for the region—as it prospered through both World Wars and post-War America. Eventually, as American industry faded in the latter half of the 20th century in favor of globalization and other economic trends, Bethlehem Steel began to shrink and the communities that relied on it were deeply impacted as jobs were lost and population growth slowed.

Cataloging this history is a major part of the National Heritage Corridor’s operations, which was strengthened by the 2013 merger with the National Canal Museum, previously an independent organization.

“The D&L had this wonderful story and the museum had the stuff—the artifacts and documents related to not only the canal, but the railroads and industries along the way,” says Daphne Mayer, the Museum & Education Director for the D&L. “We not only try to tell the story of the canals, but of the Corridor itself and of the various industries and people.”

Situated in a public park in Easton, the National Canal Museum is a hands-on, family-friendly historical record of the area, and where the D&L houses its administrative office.

Visitors can harness a fiberglass mule (which once pulled the boats along the canal towpath) or build models of different kinds of aqueducts, reinforcing how early industrialists were able to harness the wild force of water and turn it into a useful tool, like a canal. The museum also has a special exhibition for 2020 devoted to art inspired by area canals (for more on that, see Bikeout’s story on art in the area). And just outside the museum, the D&L operates mule-drawn canal boat tours, which are fully narrated by a costumed crew, showcasing the canal’s true history.

If Bethlehem Steel marked the end of an era, the company’s memory—in the form of a multi-acre campus of industrial buildings that are being reimagined in the core of the town—has been a significant part of a new moment.

Industrial reclamation has been a standard in post-industrial cities around the U.S., and is ever present in places along the D&L Trail, like Easton, Bethlehem and Allentown.

In 2016, the National Museum of Industrial History opened up in downtown Bethlehem. The museum itself utilizes reclaimed infrastructure from the steel company, housed in an old electrical repair shop.

Made of four different galleries, the museum follows the story of the Centennial Exposition, held in Philadelphia in 1876, which showed off the industrial prowess of the U.S. Several of the exposition’s artifacts—like foot-powered woodworking machinery to larger, steam-powered metal machining tools—are housed in the Bethlehem museum now. It also showcases the iron and steel industries that were vital, and the lesser known silk, textile and propane industries, which were also a crucial part of the country’s industrial history.

The museum is surrounded by reclaimed industrial space built on the old steel campus, like the ArtsQuest’s SteelStacks, an outdoor performing arts venue, Northampton Community College and Factory, an accelerator space for growing food businesses, as a few examples.

In Easton, at the confluence of the Lehigh and Delaware rivers, Jared Mast, the executive director of the Greater Easton Development Partnership, is working to boost the town’s profile, which is often as much about remembering its past as promoting its charm.

The city, too, is being reimagined. Take the Simon Silk Mill, one of the more significant mills that produced the fabric well into the 20th century. More recently it was converted in 2010 to apartments and retail as part of a $50 million redevelopment project and is a “shining example of redevelopment in the region,” says Mast.

“Easton is a small city on the water with a real urban vibe and also a real community feel, where you know people at the farmer’s market or when you walk into a bar. My wife calls it the Cheers effect,” he said, referring to the 90s television sitcom.

The Partnership manages a variety of programs, from facade beautification to public murals, but is best-known for operating the Easton Farmers Market, the longest continuously-running outdoor open air market. It more recently launched the Easton Public Market, a multi-vendor fast casual market, a sign of the city’s desire to appeal to a younger demographic compared to decades past.

These kinds of updates to the city are part of the reason why it’s attracting new businesses, like Bicycling Magazine, a division of Hearst, which is moving its headquarters to Easton from New York City.

And take for instance the work that Jaindl Enterprises is doing in Allentown, to the northwest.

After rehabbing a former bank in Allentown into an event space in 2004, one of its earlier development projects, the company has been working on The Waterfront, a $300 million, 29-acre mix of retail and residential property along the Lehigh River. The company also bought the rights to a 3.5-mile railroad, between Allentown and Whitehall Township to the north, which will help to close a gap on the D&L Trail.

As a convenor of the trail’s advocates, the D&L National Heritage Corridor team brings together the land owners and partners, like the groups mentioned in this story, to prioritize what needs to be done to improve the trail—the maintenance of it of course, and bolder initiatives, like closing its remaining gaps.

“What we found after 10 years of planning was that the most important thing we could do is connect these five counties, and that connection is the transportation route between them,” says Elissa Garofalo, the D&L’s Executive Director, who has been with the organization since 2000 and has led it for 6 years. “As a result, we’ve become one of the longest-standing and most successful heritage areas in the country,” she says.

Of the planned 165-mile route, so far 140 miles are complete, with two gaps left to be filled, one between Allentown and Northampton county and a section between Wilkes Barre and Mountain Top, PA. Just last year, the Corridor celebrated a major milestone when the $5.3 million Mansion House Bridge was completed, connecting the D&L Trail to Jim Thorpe.

“The most important thing for us is to provide equitable access for all,” Garofalo says. “The trail is a transportation alternative and a free outdoor gym, and of course it provides economic benefit to the entire Lehigh Valley.”

Find tripsFind trips
The Lehigh Valley's industrial relics set the stage for a reimagining
Industry shaped the towns that dot the Delaware and Lehigh Rivers. Now, its relics are the foundation of a new economy. 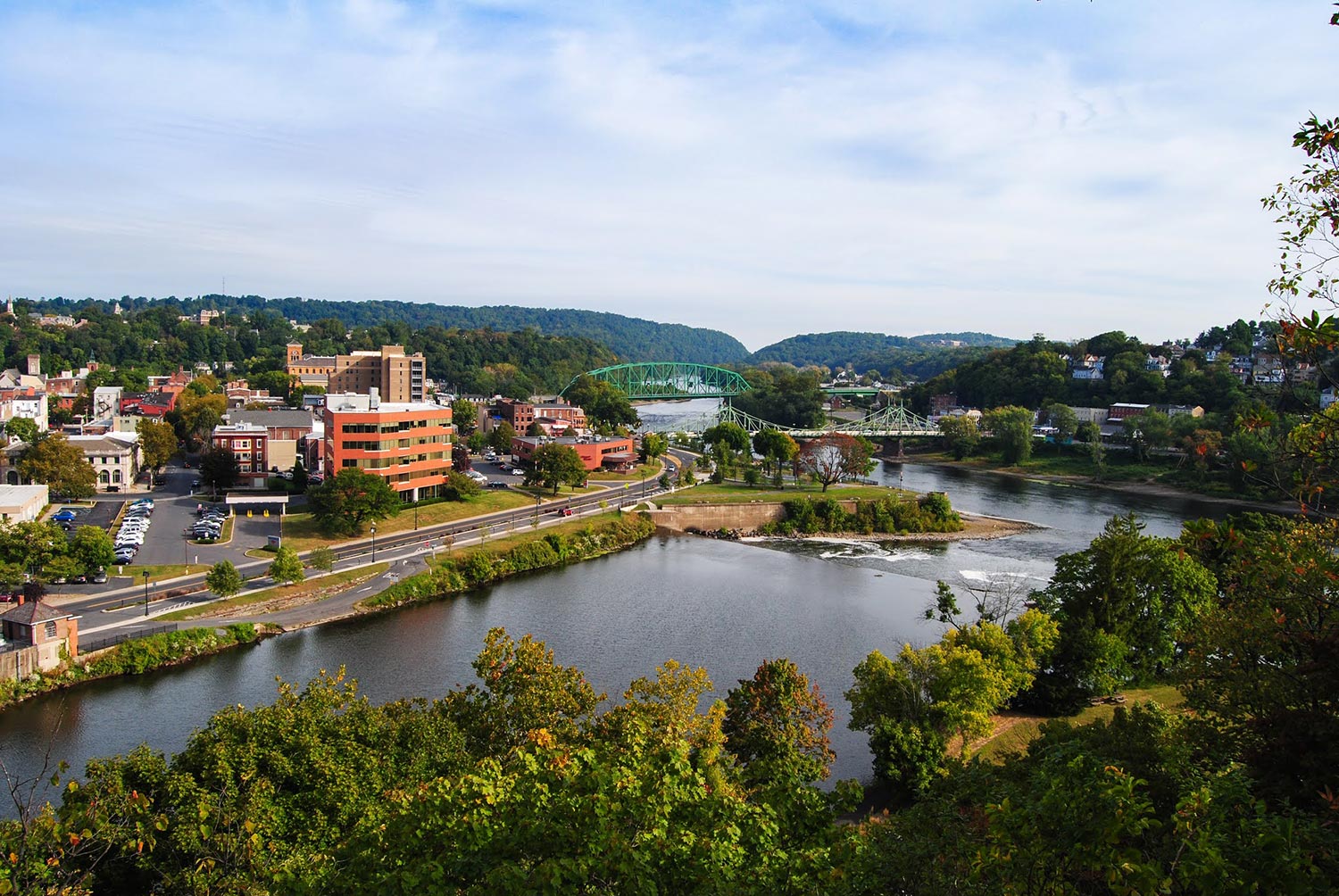