At the Lehighton Outdoor Center in the Lehigh Valley.

Outdoor escape inside the Lehigh Gorge

Learn more
Enjoy scenic vistas and waterside views as you bike the Lehigh Gorge between Jim Thorpe and Hickory Run State Park.
is a part of this Bikeout experience:
Learn more

A whitewater rafting boom in the middle of the 20th century is responsible for the association in many people’s minds, along with the ample game lands, state parks and wide open landscape in the northern part of Pennsylvania.

But what you may not know is that the region has been a source of recreation for people as far back as the mid-1800s.

Back then, Mauch Chunk—the town that was renamed Jim Thorpe in 1954, and not without controversy—built a reputation around a unique attraction: a roller coaster.

It’s a bit of an exaggeration, but not by much. The idea of using a cable to pull a railcar uphill and allow gravity to manage the ride down was first designed to transport coal, the industry that built the town. Later, when steam power became a more efficient way to do the job, folks in Mauch Chunk came up with the ingenious idea to turn the old railway innovation into an amusement ride. The Switchback Railway went on to become one of the most popular tourist attractions in the U.S., despite it paling in comparison to the roller coasters that are built today.

That’s a story that Jerry McAward—who moved to the area in 1979 and owns several outdoor recreation businesses in the region—loves to share. He remembers telling it to skeptical neighbors when he was trying to build the Lehighton Outdoor Center in Lehighton, a smaller town just south of Jim Thorpe, which houses his rafting and kayak operations.

“It’s in the DNA for people to come to this area,” McAward says. It’s been a recreational destination for 220 years. I’m trying to build a company that brings people to Lehighton, to build a memory, to recharge and all the reasons that someone seeks an outdoor experience.”

Today, McAward’s water sports businesses are proof of how the region has defined itself as a recreation mecca, and many folks interviewed for this story said that the Lehigh River’s rapids are some of the best in the country, and certainly among the most convenient for folks on the East Coast. Other sporting opportunities are also abundant in the region, like skiing, which helped further cement the region’s reputation for outdoor adventure as it popularized in the 80s and 90s, and the hiking, fishing and hunting which have maintained a steady heartbeat for much longer.

But the change that’s coming next will be biking, McAward says, especially as the D&L Trail grows as a regional destination, after completing new sections in 2019 that have connected more towns to the same economic possibilities that Jim Thorpe has realized.

“Cycling is a big part of our future. It’s why I built the Outdoor Center on the D&L Trail. I see the potential,” he says.

"The D&L Trail is going to be a major artery in this old living organism that is Carbon County.”

Bill Drumbore has been riding in the Lehigh Valley since before the D&L Trail existed, at least as a sanctioned multi-use trail. He grew up in the region and remembers having to carve out his own bike paths through the local hills and forests and along the Lehigh.

Drumbore, a mountain biker who works as a bike mechanic at McAward’s Lehighton Outdoor Center was the person that outsiders relied on to understand the area. “When people came to the area and asked who knew it best, they pointed their finger at me,” he says. It was how he met his pal Dave Bucher, before the two started Mountain Bike Weekend in 1986, an annual event that attracted mountain bikers from across the country, before mountain biking was a thing.

Drumbore says the biggest difference between then and now is what has happened to the Jim Thorpe itself.

The town, which is situated along the Lehigh River in Carbon County, was a prominent part of the coal transportation pipeline and thrived throughout the 19th and 20th centuries. But as the industry declined, the city was dramatically altered and many of its buildings fell into disrepair.

What brought the town back was tourism. Many folks point to economic development driver Agnes McCartney, who helped turn around Jim Thorpe’s image as an old coal town. While many saw the town as dying off, McCartney saw a diamond in the rough.

She was able to chase down federal grants and helped to preserve assets that were already there—like the town’s train station and other historic buildings—and eventually weave together a story that drew tourists again, especially ones interested in being outside. Today, the town is a shining example of reclamation, and on a sunny Saturday in October, people filled the main street sidewalks in Jim Thorpe, stopping between quaint shops and restaurants that now fill the historic buildings there. There was hardly a vacancy to be found.

At the start, there were a lot of questions from locals. Who are these people paddling? Who are these bikers? Shouldn’t we be focused on bringing back the coal industry? But over time, the town’s concerns turned to excitement and support. More people started moving in and worked to turn abandoned buildings into retail and residencies.

Another early believer was Paul Fogal, who started Pocono Whitewater Rafting in 1977 and has grown the business to include activities like biking and paintball.

“I’ve been all over the world, and the town has assets in the top ten. From the mansion, to the museum, to the opera house, to the train station, to the hiking and the story of coal,” Fogal says.

Fogal, too, has shifted his focus to biking because of the potential that has grown out from the D&L Trail, which connects people to the amenities in Jim Thorpe and the surrounding towns. And he expects that to continue, as the trail gets closer to finishing a connection to Allentown, to the south, which he hopes will attract more longer-distance riders on the 165-mile path.

The connectivity provided by the D&L Trail has been a crucial part of the continued investment in the area, says Brian Greene, Director of Trails and Conservation at the Delaware & Lehigh National Heritage Corridor, which oversees the trail.

“When we first started talking in the late 90s with people, saying we’re going to build a trail and people will come from all over to do this, there wasn’t enough there there yet,” he says. “Now when I go to those meetings, they’re already bought in. New businesses are calling and asking for trail count numbers and what riders are interested in and how to market to them. We planted a lot of seeds and 30 years later they’re bearing fruit.”

The question today is if the model that worked for Jim Thorpe will flow to other towns in the area and as successfully.

Places like White Haven, Weissport, East Penn, Slatington and Lehighton—the latter where McAward built his recreation headquarters—all could benefit from the recreation economy, and were finally connected together after the D&L opened its $5.3 million Mansion House Bridge last year. This stretch of trail connected four counties: Luzerne, Carbon, Lehigh and Northampton Counties and many communities.

“You have to build that potential economy, ” McAward, the outdoor center owner says. “The D&L Trail is going to be a major artery in this old living organism that is Carbon County.”

Find tripsFind trips
Could biking be the next growth economy in the Poconos?
A look at what made the Poconos a outdoor recreation mecca and what lies ahead. 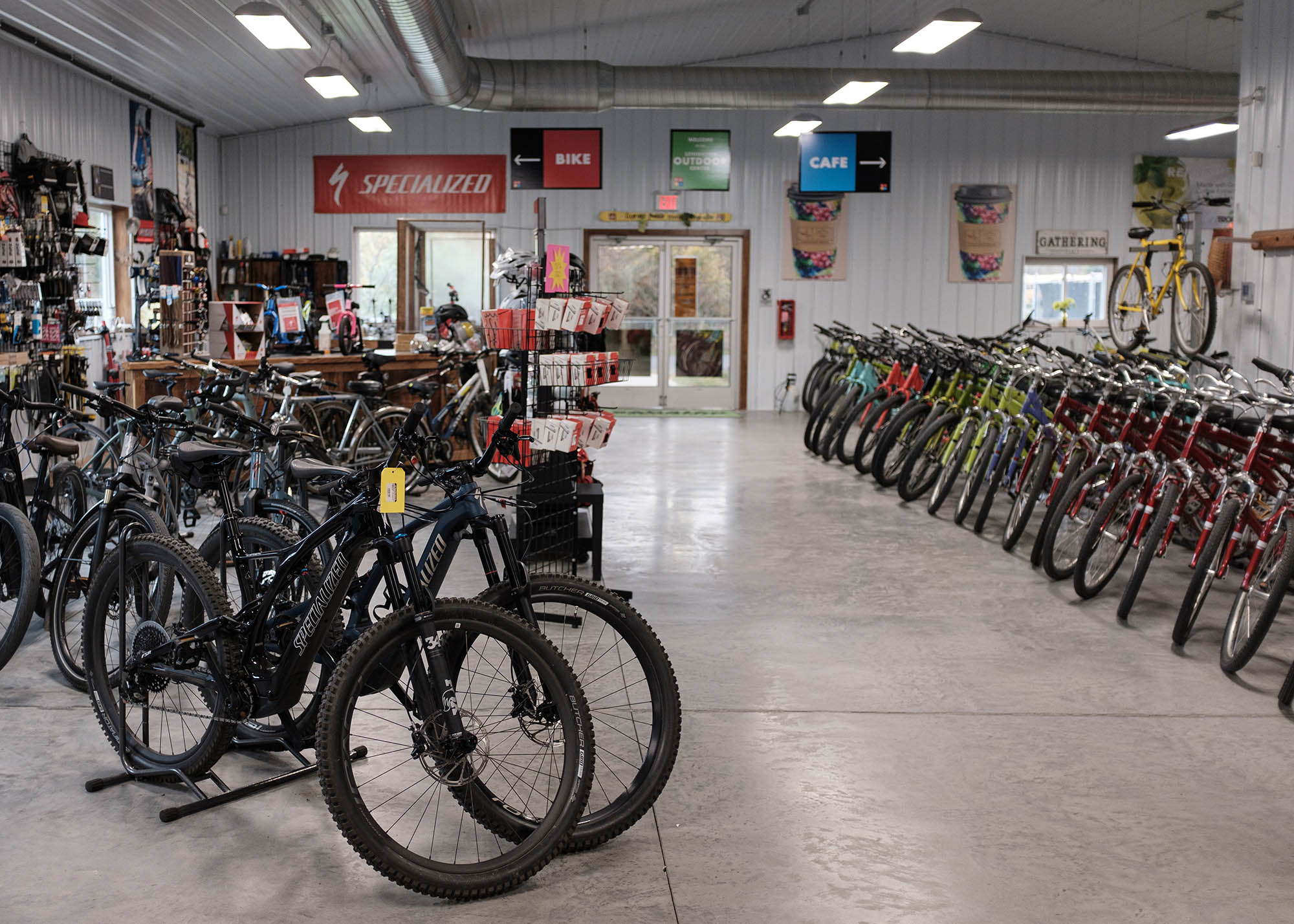