Rob Cook
is a part of this Bikeout experience:

Learn more
Take in the gorgeous scenery of the Finger Lakes during this long weekend of biking, glamping and skill-building, including a bike overnight to a private shiitake mushroom farm.
Rob Cook
is a part of this Bikeout experience:
Learn more

This summer, Bikeout is headed for the Finger Lakes.

We’ll be taking folks on a long weekend of biking, glamping and bike camping skills-building, including an overnight at a private shiitake mushroom farm.

With more details to come later this month (sign up for early access updates here), we can share this to start: some of our bike camping workshops will be taught by Rob Cook, a Program Coordinator at the outdoor education program at Cornell University, the ivy league college in Ithaca, New York.

Cornell once offered bike touring classes, but back in the 80s. Cook, who helps oversee Cornell’s rock climbing and biking programs, helped revive the bike touring program almost a decade ago for a growing audience of people he says were interested in learning more about bike travel.

Cook got his degree in outdoor leadership at Ithaca College and was an avid biker and backpacker, before he found a way to combine his love of both. “It was natural to bring these two things together, the joy and practicality of biking, along with traveling and seeing cool places,” he says.

At Cornell, classes meet for four weeks of training, including classroom instruction on safety, how to pack and training for a trip, along with a series of short rides. The class culminates with a weekend overnight adventure in the Finger Lakes region from Ithaca to Taughannock State Park, which sits near the Black Diamond Trail, a popular local bike path and one of our routes at Bikeout: Finger Lakes. His classes aim to be accessible: including flat, short routes with fun destinations, and easy access to hardware, with bike and camping gear rentals offered by the university.

“It’s been eye-opening where people are coming from,” he says. “It’s been really interesting to get folks that might not otherwise get into this. It’s a doorway for people who might have not thought of it before.”

Consider Bikeout: Finger Lakes a crash course. During our four day trip, Cook will have the opportunity to share his bike packing expertise, and afterward the trip's focus shifts to exploring the region, and like Cook's class, will end with an overnight bike adventure. More on that soon.

We asked Cook to share a few of his recommendations for folks that are interested in getting more involved with bike camping and travel, after ten years teaching the course.

Ride the bike you already own

If you’re just getting into bike camping, you probably don’t own a specialized touring bike. And you don’t need to. You can tour with just about any bike, Cook says. For example, mountain bikes—which are common consumer purchases, but not built for touring specifically—actually work well for long-distance bike tours, since their larger tires are comfortable and handle a variety of terrain, including rough paths. That example says a lot about the versatility of bicycles on a long distance ride. Though a touring bike built for the job will ultimately be more comfortable, and every bike should be checked by a local bike shop mechanic before a first trip, don’t let your own bike stop you from using it.

If you are considering purchasing a dedicated touring bike, consider renting one first, Cook says. Take, as one example, handlebar choice. There are plenty of options, so find the one that’s right for you. “You might see dropbars in a lot of media, or see more ‘serious riders’ using them. But maybe you’re more comfortable with flat bars,” he says. Instead, get a better sense of what features you may or may not like by renting and riding any bike you’re thinking about buying for a substantial amount of time, say, for a day ride or weekend trip, before you commit. Check with your local bike shops and colleges with outdoor equipment rental programs.

There are many DIY options for getting gear on your bike

Expensive gear can certainly be a barrier to entry. You can avoid making some financial commitments—especially before you know if you like bike camping—by trying homemade options.

Cook points to kitty litter panniers, a celebrated beginner option, in which one transforms durable plastic bulk kitty litter containers into a way to carry gear on a bike. And as interest in bikepacking has grown, some people have reimagined the use of affordable soft, roll-top dry bags, often used by paddlers, as a great way to store gear, by strapping them on to the bike. Or, take a regular backpack, but keep it light as possible to avoid too much discomfort.

Choose a great destination. It doesn't have to be epic

You don't need to go far to have an adventure. Instead, start with a short trip, Cook says. Getting somewhere by bike can be a fun, new way to experience a place you already know well. For example, Cook says he lives near a few state parks that have campgrounds, but because they’re so close, he generally doesn’t have a reason to stay overnight. But if he rides his bike instead of using a car, he turns a 20-minute trip into a weekend experience. “If you ride your bike there, it’s a fun way to explore the area you that live in a different way.” Another idea: consider setting your destination for a friend’s house not too close to home, and stay there overnight.

Not everyone is into roughing it, and that’s OK. Cabins, Airbnbs and hotels are great options too. There’s a concept in the bike touring community lovingly referred to as “credit card camping,” or riding without any gear except your wallet, and stopping in a hotel each night. That mode could be pricey, but you could avoid the headaches of transporting too much gear, and enjoying the comfort of indoor accommodations.

But this mode of travel has become more affordable and more widely available than it used to. The concept has evolved in the past decade with an array of new lodging options, widening opportunities for places to stay and where to go.

More state parks are now renting comfortable built-out cabins, an affordable alternative to using a tent. Airbnb has exploded in recent years, widening its geographical availability and providing for a wide range of comfort levels and cost options. Other digital services are growing too, like HipCamp, which offers affordable places to camp on private land, and Warmshowers, a community of bike-camping homeowners that offer space for free to other traveling cyclists.

Want to get started but are feeling overwhelmed? Join a class or commercial tour, Cook says.

This option can be cost prohibitive, but instructive and helpful. “If you’re interested in bike camping and you have the means, it’s a great way to get your feet wet and get into it with people who are experienced and know what they’re doing,” Cook says.

And like Cornell Outdoor Education, other colleges and universities offer bike camping trips and courses, often at a lower cost than operators, to help people experience bike travel for the first time. There may also be organized riding groups in your region to join, some of which host their own overnight trips. Group rides are a great way to meet others who share your interests and to get more involved with the bike community. 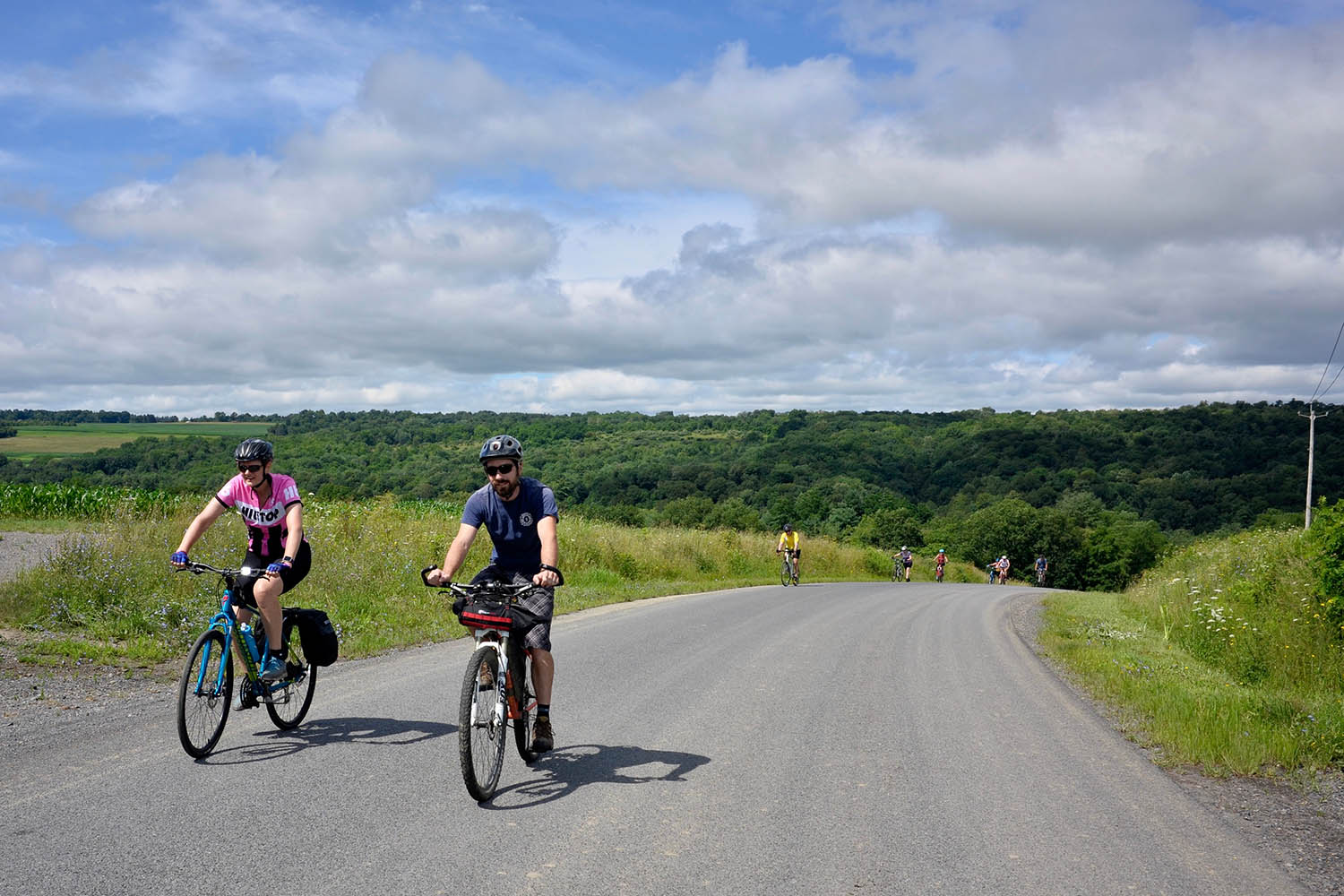